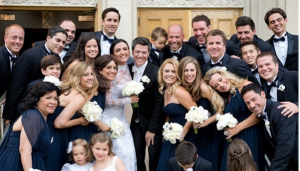 Reality star Jenni Pulos of Bravo’s “Flipping Out” had parts of her wedding to husband Jonathan Nassos broadcast on the show this past Tuesday.

In a recent interview, Pulos said it was a “long, Greek ceremony” with a lot of priests, great music, and plenty of Greek dancing.

Of course, it wouldn’t be reality without the drama. Things got uncomfortable after Pulos’ boss, designer Jeff Lewis, decided to play a drinking game that involved downing alcohol whenever a family member or friend said “God.” The show also featured the bride’s stressful moments leading upto the wedding, including a problem the venue had with payment.

During her chat with Celebuzz, Pulos mentioned she and husband Nassos are ready to start a family, and are “trying” with hopes to have one soon.

Check out the full interview: