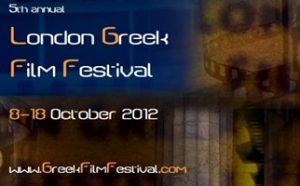 The 5th annual London Greek Film Festival drew to a successful end on Oct. 18 at West London’s Westbourne Studios and gained praise from the newspaper Time Out London, which wrote “In the face of adversity, Greek cinema battles on.”

The 10-day event hosted a variety of Greek feature films, short films and documentaries. “It is more like an independent, optimistic cultural event that aims to become an international meeting point for Greek films from around the world and  promote contemporary Greek cinema in all its forms,” the festival’s artistic director Chris Prosylis told AMPE.

He stressed that, “Today’s Greece is not only a Greece that faces a series of economic, political and social crisis hits, and this is clearly demonstrated by the positive and significant presence of Greek artists at a festival like this.” Organizers noted the “very good and creative collaboration created in the last years, between the festival and ERT as well as the Press Office of the Greek Embassy in London.”

Speaking to AMPE about the importance of the festival, the spokesman for the Greek Embassy in London, Spyros Diamantis, said, “It is an extremely important event which promotes Greece and its culture to London, a major cultural metropolis of Europe. It definitely consists one of the most important initiatives of cultural diplomacy in the British capital.”

The Odysseus Awards ceremony  concluded the festival. Due to the high artistic and creative quality of all this year’s entries, the jury of the festival decided to split the awards in some categories between two or even three winners.