Christofias to Meet Hollande and the Pope 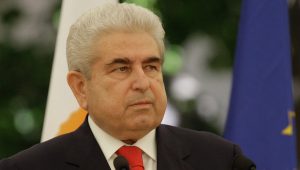 Embattled Cypriot President Demetris Christofias is visiting the Vatican where he is scheduled to have an audience with Pope Benedict XVI on Oct. 25 and the  Cardinal Secretary of State Tarcisio Pietro Evasio Bertone.

The next day, Christofias will travel to Paris to meet French President Francois Hollande and inaugurate an exhibition at the Louvre on Medieval Cyprus, within the framework of Cyprus’ Presidency of the European Council which lasts until Dec. 31.

Christofias is trying to manage domestic problems as well as the country is being forced to seek a bailout from international lenders because its banks were nearly toppled by their exposure to Greek bonds when Greece imposed 74 percent losses on investors in a desperate bid to write down its debt and right its floundering economy.