Tony Abbott, leader of the Opposition in the Australian House of Representatives and possibly according to polls the next Prime Minister, declared that his party will stand firmly on the side of Greeks living in the country. Two members of his party, Arthur Sinodinos and Sophie Mirabella Panopoulos are of Greek descent and very sensitive of Greek immigrant issues. That came during his meeting with Bill Papastergiadis, President of the Greek Orthodox Community of Melbourne and Victoria, and  two other members of his party on the Greek Community Board, Kostas Tsoubakos and Nick Parthimos. 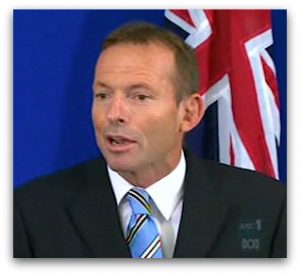 Community representatives briefed Abbott on the course of construction jobs at the Hellenic Cultural Center of the Greek Orthodox Community of Melbourne and Victoria, as part of the fourteen-floor Greek community center tower located in downtown Melbourne.

The Victoria federal government and the State government announced they will spend two million dollars to support this center. It is also estimated that another two million has been collected by Greek descent entrepreneurs and individual donations of about $250,000 each.

Community officials also thanked Abbott who, once again, promised that if his party comes to power, he will offer his help to unemployed Greeks. Other issues were raised regarding the need to help newcomers settle in Australia. Abbott also said he wants to consider ways to promote the Greek language in Australian universities.