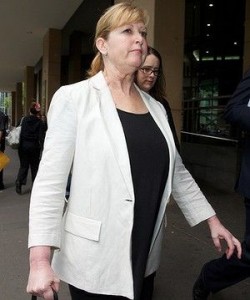 Deborah Goulopoulos, 52, has pleaded guilty in a Melbourne court to one charge of persistent sexual abuse of a child under 16 after a teen, now 16, said she forced him to have sex with her starting when he was just 13.

According to police, the boy said that after the first time, that sex ”sort of just became the norm .I never wanted to do it, but I felt as though I had to do it.” Court records showed that he stated the woman gave him money, gifts, alcohol and drugs during a 2-½ year period. Four other charges against her were dropped.

In his statement, the boy said he met Goulopoulos at a Box Hill skatepark with her son. “It was like she was a teenager, the way she used to act,” he said. “Deborah was always around and she was really easy to talk to. She didn’t have any rules. We could do what we want.”

He recalled the second or third time he stayed at her house that she “put it on me to have sex with her” before they had sex in the garage.He told police: “We didn’t speak about anything. I was in shock. This was the first time that anything like that had happened to me.”

He said that six months later he regularly became ill at school, could not concentrate and was getting bad grades, but that he didn’t tell his parents. But when his father caught him with $1,000 he said he told him everything, begging him not to say anything and his father agreed, before Goulopoulos was later arrested. She was bailed to appear in the County Court on Nov. 27.