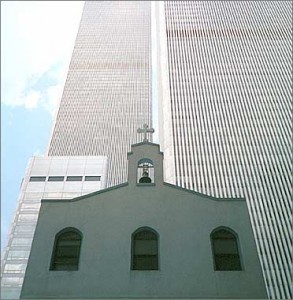 Plans to rebuild St. Nicholas Church, destroyed when the World Trade Center buildings collapsed on it during the Sept. 11, 2001 terrorist attacks, are finally under way after years of delays.

New York Governor Andrew Cuomo, during the joint luncheon of the Archdiocesan Council of the Greek Orthodox Archdiocese of America and the National Philoptochos Board, announced the work would begin in a year.

Archbishop Demetrios thanked Cuomo for helping close an agreement for Saint Nicholas’ rebuilding. Cuomo said the work would start after the completion of the Vehicle Security Center. The church will rise atop a platform the Port Authority will build over one of the center’s .

There was a burst of applause when Cuomo said “The Port Authority will begin construction immediately on the site and we look forward to being with you next year at this time when we hope the PA will have completed construction of the foundation and turned the site over to the Church.”