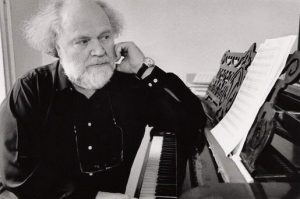 One of Greece’s best-known composers, Yannis Markopoulos, give a concert in New York, where he will also receive the 2012 Pheidippides Award in honor of his great offer to Hellenism. He has had a long and distinguished career and became internationally known through his works, particularly for his score to the hit British TV series Who Pays the Ferryman? in the 1970’s

Hellenic Public Radio-COSMOS FM, sponsored by the Greek American Educational Public Information System(GAEPIS,) as part of celebrating its 25 consecutive years of public service and broadcasting in the New York metropolitan and tri-state areas, will bestow the award in a ceremony on Nov. 2.

On Nov. 4, he will lead a concert at the historic Great Hall at the Cooper Union, in Manhattan. The concert will feature the internationally acclaimed Greek tenor, Mario Frangoulis, a 15-member Orchestral Ensemble as well as an eight-member chorus conducted by the composer and guest singers Vasiliki Lavina and Alexandros Belles. Markopoulos, the three singers, chorus members and Greek musicians, are performing without cost, the organizers said.

The Pheidippides Award, is a creation of the world renowned jeweler Ilias Lalaounis, and given annually to an individual or organization that contributes in promoting and preserving Hellenism on a global scale.