Tonia Sotiropoulou Gets Sexy on Skyfall 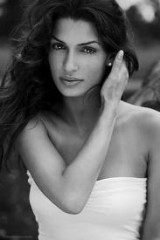 The new James Bond woman, Greek actress Tonia Sotiropoulou, is set to appear in the new 007 film, Skyfall, and said she was helped by star Daniel Craig, who portrays the British spy, to overcome her anxiety over sex scenes in the movie.

Talking to Daily Star Sunday, Sotiropoulou, 25, said that he helped her relax before filming the steamy shots. “I was a bit stressed at first, because I was in such a big film, but Daniel really helped me. I felt at home within a few hours,” she stated.

She said the experience was one of the most exciting and comfortable she has had in the business and added that, “I created a chemistry with him, because he’s so accessible. I learned a lot from observing him and we had a great time”.

The excitement is already building up among millions of Bond fans everywhere, before Skyfall finally hits cinema screens on  Oct. 26. To add to this excitement, producers made sure to keep the action-packed plot under wraps, so nothing would be revealed till the last minute. Some of the stars, such as Dame Judi Dench, were not even given scripts, so the story lines wouldn’t be leaked.

The Greek beauty, who filmed her scenes in Turkey, confirmed that, “A lot of things have changed about Bond. There’s a lot of transformation going on. Bond fans will love the new chapter its entering.” This year marks the 50th anniversary of the first Bond film, Dr. No, starring Sean Connery, who marked the character as his own, although Craig has gotten strong reviews for his take on the role.