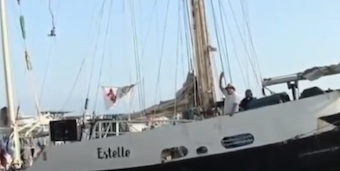 Israeli troops on Saturday boarded a boat carrying pro-Palestinian MPs and activists seeking to run its naval blockade on the Gaza Strip, blocking the latest attempt to reach the enclave by sea, the military said.
The operation, which the military said was concluded peacefully, ended the latest bid by activists to breach Israel’s tight maritime embargo on Gaza which prohibits all naval traffic in and out of the Palestinian coastal territory.
“A short while ago, Israeli navy soldiers boarded (the MV) Estelle, a vessel which was en route to the Gaza Strip, attempting to break the maritime security blockade,” the military said in a statement, indicating the Finnish-flagged vessel was being led to Ashdod port in southern Israel.
“There was no violence,” a military spokeswoman told AFP, saying troops had taken control of the 53-metre (174-foot) vessel. “The passengers did not resist.”
On board the ship are 17 passengers, among them five parliamentarians from Europe (2 from Greece) and a former Canadian lawmaker, organisers said. It was also carrying a shipment of humanitarian aid and 30 doves, which the passengers had been intending to release on arrival in Gaza.
The announcement came shortly after organisers told AFP that the ship had “come under attack” after being approached by navy vessels some 38 nautical miles off the Gaza coast.
The military said the boarding was carried out only after “numerous calls to the passengers onboard” which went unanswered.
“As a result of their unwillingness to cooperate and after ignoring calls to change course, the decision was made to board the vessel and lead it to the port of Ashdod,” the military said, indicating that troops “did not need to use force.”
On arrival at Ashdod, the ship’s passengers would be handed into police custody and then onto the immigration authorities.
Activists on previous Gaza-bound flotillas which were stopped by the navy have all been taken to Israel and immediately deported.
The vessel had set sail from Sweden several weeks ago, stopping off in Finland, France and Spain before leaving the Italian port of Naples on October 6.
“The Estelle is now under attack — I have just had a message from them by phone,” Victoria Strand, a Stockholm-based spokeswoman for the Ship to Gaza-Sweden campaign told AFP at 0830 GMT.
Among those on board are parliamentarians Ricardo Sixto Iglesias from Spain, Sven Britton from Sweden, Aksel Hagen of Norway, and Vangelis Diamandopoulos and Dimitris Kodelas, both from Greece. Former Canadian lawmaker Jim Manly is also on board.
Strand said the Estelle, which has previously been used in Greenpeace missions, had been expected to dock in Gaza late Saturday afternoon.
Activists organised a major attempt to break the Israeli blockade in May 2010, when six ships led by the Turkish-owned Mavi Marmara tried to reach Gaza.
Israeli troops stormed the Marmara, killing nine Turkish activists and sparking a diplomatic crisis with Ankara, which expelled the Israeli ambassador and has cut military ties with the Jewish state.
Since then, there have been several other attempts to reach Gaza by boat, all of which have been stopped by the Israeli navy, although there has been no repeat of the bloodshed.
In July 2011, another flotilla tried to set sail for Gaza from Athens but several of the boats were unable to sail due to what organisers said was sabotage, while others were banned from leaving by the Greek authorities.
Another attempt in November saw an Irish and a Canadian ship blocked from reaching the Palestinian territory.
Israel says its blockade is necessary to prevent weapons from entering the coastal territory, which is run by the Islamist Hamas movement.
Last year, a UN report on the flotilla raid accused the Jewish state of acting with “excessive force” but found that its naval blockade on the coastal territory was legal.
(source: AFP)

Heraklion: Discover the Capital of Crete