Greek Women Prostituting Themselves in Italy 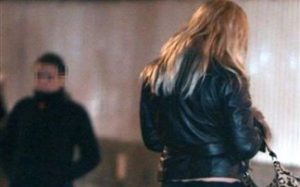 The Italian daily newspaper Il Messagero, in an extensive report, said that many Greek women, desperate over the country’s economic crisis and with few prospects for income, have gone to Italy to work as prostitutes.
“Indebted Greece is beginning to walk the streets for money; the same streets that human traffickers have been owning for years with their female victims from Romania, Moldavia, Ukraine and Nigeria,” reads the report.
According to the report, Italian police officers have tracked Greek prostitutes from Patras and Igoumenitsa, who are now working as prostitutes near the center of Rome. Although the number of these women is still too small to fuel unrest, Italian police said they are fearful more Greek women will come as Greece’s crisis worsens.
It was unclear whether the Greek women have traveled on their own or been trafficked by gangs from Greece and Romania. A high-ranking officer from the Romanian police told the Italian daily that poor regions of his country have very much in common with some Greek regions and that many women have resorted to prostitution. Italian port authorities have located Greek women in Apulia, Southern Italy, reaching the country through Corfu and then wandering off to other Italian cities.