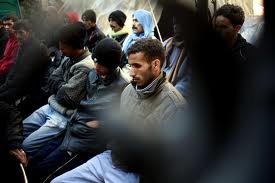 Human rights groups in Greece are accusing the government of subjecting asylum seekers to a “degrading and illegal” application process that aims to discourage them from formally requesting state protection.
Fourteen local rights groups said Friday that refugees from war zones, including Syria, and other repressive regimes are effectively unable to file for asylum because Greece’s main processing center in Athens accepts as few as 20 applications each week. They issued a 50-page report criticizing the process that they are sending to the European Union.
“The process is ridiculous, degrading and illegal,” said Efthalia Pappa, a coordinator of the study. “It’s an insult to our humanity.”
Greece is the EU’s busiest entry point for illegal immigrants and asylum seekers, and has already acknowledged that its asylum screening facilities are insufficient.
Hundreds of asylum seekers, including unaccompanied children, are forced to wait in long lines each week without access to food or toilets at the asylum center, Pappa said.
She said researchers found evidence that criminal gangs were controlling who made it to the front of the asylum line and said police used batons and pepper spray on more than one occasion to control the crowds.
Vassilis Kerasiotis, a lawyer who provides free advice to asylum seekers, said the situation was likely to get worse after an administrative court this week approved a government order allowing authorities to double the maximum detention period for suspected illegal immigrants to a year.
“The situation is a total jungle,” he said. “The police do not allow themselves to be held accountable because they act on verbal instructions when carrying out the asylum process.
“We have no choice but to complain to the European Union,” he said.
(source: AP)