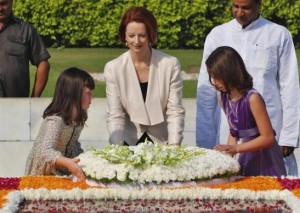 After a three-day visit to India, Australian Prime Minister Julia Gillard said there’s a need for closer defense relations between the countries to offset China’s military influence in the region. She also stressed the importance of negotiation in nuclear talks.

The Green Party opposes uranium exports because India has not signed the International Treaty on the Non-Proliferation of Nuclear Weapons. New Delhi said the treaty discriminates against countries that carried out tests after it came into force in 1970.

Gillard met with the Indian Prime Minister, Manmohan Singh, cabinet members and Sonia Gandhi, President of the Indian National Congress. The visit aimed at promoting economic ties as bilateral trade has hit $20 billion and is growing 20% annually. “We want to work together to strengthen our economic partnership and strengthen our strategic partnership,” Gillard said.