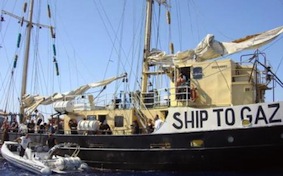 A sailing ship with pro-Palestinian activists that is planning to break an Israeli blockade of Gaza took on food and passengers off the southern Greek coast, a spokesman said on Wednesday.
The Estelle, which first set off from Sweden and left Naples in Italy on October 6, stopped in international waters off the island of Crete on Tuesday afternoon, where it loaded up with food and passengers.
The ship then continued its journey with five lawmakers on board – one from Sweden, one from Spain, two Greeks and a Norwegian, the spokesman for the Ship to Gaza Sweden movement, Mikael Loefgren, told reporters by telephone.
Thirty doves that are to be freed when the boat arrives in Gaza were also on board.
“They will now sail to Gaza. It’s hard to say when they get there given the type of unpredictable sea we have now in the eastern Mediterranean,” said Loefgren.
He expected the Estelle to arrive in Gaza around Saturday.
Loefgren identified the members of parliament as Ricardo Sixto Iglesias from Spain, Sven Britton from Sweden, Aksel Hagen from Norway, Vangelis Diamandopoulos and Dimitris Kodelas from Greece, as well as former Canadian lawmaker Jim Manly.
An activist for the Free Gaza movement told reporters that Greek coast guards failed to stop two speed boats from leaving the small port of Plakias in southern Crete with the supplies on Tuesday afternoon.
On its way to Naples, the Estelle stopped in Finland, France and Spain.
(source: AFP)