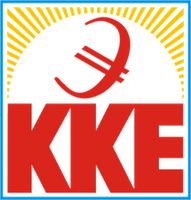 The visit comes at a time when the party’s popularity is dwindling rapidly in Greece as surveys show it barely has enough support to win seats in Parliament if a new election were to be held.