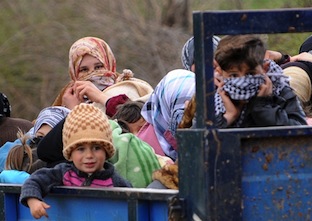 The Greek government will initiate operation ‘Ioni’ to host 20,000 Syrian refugees in an attempt to fulfill Athens’ rights obligations under the United Nations charter.
Plans are underway to provide shelter on two Greek islands for 20,000 Syrian refugees, Greece’s public order ministry said on Thursday.
The Conservative-led government of Antonis Samaras “foresees providing hospitality to 20,000 refugees from Syria who will be accommodated in special facilities on the island of Crete and Rhodes,” the ministry said in a statement.
The move would fulfil Athens’ human rights obligations under the United Nations charter.
The operation is code-named ‘Ioni’ after the first ancient Greek colony established in Syria, the ministry said.
No further information was given on whether the refugees will be lodged in hotels or other purpose-built facilities.
More than 32,000 people are believed to have died since the start of the uprising in March 2011 against President Bashar al-Assad.
Assad’s regime has insisted the insurgents must stop the violence first as it turned down a call for restraint issued by the UN secretary general.
Thousands of refugees from Syria are currently in Turkey and Jordan.
Athens has traditionally maintained close relations with the Arab world and recently helped treat over 2,000 wounded from the uprising in Libya.
Authorities are now worried that the conflict in Syria will increase migration and refugee pressure on Greek borders at a time when the country’s crisis-stricken services are struggling to handle hundreds of thousands of undocumented migrants already present in the country.
A plan to turn disused barracks around the country into holding centres for migrants is already underway.
(source: AFP)