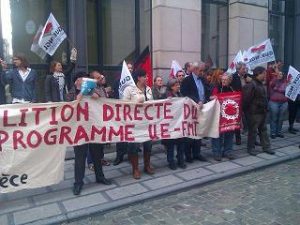 A spontaneous protest was held on Oct. 9 in Brussels in front of the Greek embassy, against the visit to Athens of German Chancellor Angela Merkel.

Left-wing activists, Members of the European Parliamen from the Greek Coalition of the Radical Left (SYRIZA,) which finished second in the June elections, gathered in opposition to Merkel’s trip.

The said their aim was to show their support to Greek workers and protest the ban of protests in Athens that was defied by demonstrators. Prime Minister Antonis Samaras wanted to squelch demonstrations by using a law put into practice by the military junta that ruled from 1967-74.

MEP Nikos Chountis of SYRIZA stated that austerity is not working in every corner of the continent. He also pointed out that the fight the Greek people are giving is the same as the fight of the Portuguese, the Spanish, the Italian and the Irish people and he called for the creation of a Europe for the people, not banks or big businesses.

Finghin Kelly, a member of the Socialist Party of Ireland which has elected MEP Paul Murphy, stated that although Ireland is portrayed as an example where austerity bear fruits, this is not the truth. A lot of people are immigrating to English speaking countries such as Australia, United Kingdom or the U.S. because of skyrocketing unemployment he underlined. Protestors shouted slogans against austerity, the International Monetary Fund and the European Union, two of Greece’s lenders, in English, French and Spanish before they left.