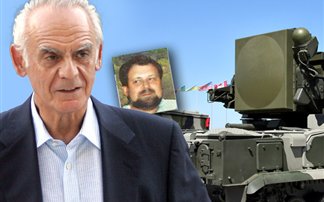 A Greek businessman who had been accused of being part of the bribery and money laundering network involving former Defense Minister Akis Tsochatzopoulos, who is in jail on charges of stealing as much as $1.29 billion from defense contracts has been found dead in a hotel room in Jakarta, Indonesia.
Vlassis Kambouroglou was the Managing Director of Drumilan International, which was involved in the sale of a Russian-made TOR-M1 missile system to Greece. Authorities in Indonesia did not say how he died. Kambouroglou was called to testify before a Parliamentary inquiry into the arms deal in 2004 but denied that his company made any money from the deal. No charges were brought against him.
Tsochatzopoulos’s cousin, Nikos Zigras, who is a key suspect in the graft case, claimed during questioning by prosecutors earlier this year that Kambouroglou was involved in bribing the ex-minister. Greek media reported that Kambouroglou may have had as much as $8.75 million in secret bank accounts.
Tsochatzopoulos had vowed to tell all he knew about corruption in Greece as the case grew against him and more evidence came to light that authorities said he was stealing money from an array of contracts to enrich himself and drive up the cost of the equipment.
In September, a Greek magistrate investigating the alleged money-laundering racket said he was ready to order the seizure of $12.7 million worth of Tsochatzopoulos’ properties, the newspaper Kathimerini reported.
The former head of procurements at the Defense Ministry, Yiannis Sbokos, pleaded his innocence to accusations that he helped former minister Akis Tsochatzopoulos launder some 80 million euros, ($103.74 million) in bribes for arms contracts.