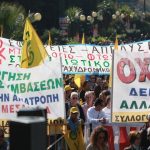 Greek labor unions called a work stoppage and a rally in Athens on Tuesday to protest against the planned visit of German Chancellor Angela Merkel to Athens, a union official said on Friday.
The rally, called by the country’s two main labor unions for the public and private sector GSEE and ADEDY, will take place outside the Greek parliament at 1 p.m., ADEDY official Ilias Iliopoulos told Reuters.
“This is how we welcome Mrs. Merkel,” he said.
The Independent Greeks, a right-wing anti-bailout party, has also called for a separate rally on Tuesday outside the German embassy in Athens.
(source: Reuters)