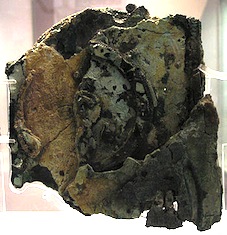 A new search has begun at a Greek island where an ancient device known as the world’s “oldest computer” was found more than over a century ago, an official said on Oct. 4, adding that other discoveries were possible.
Archaeologists this week returned to Antikythera, the Aegean Sea island where sponge divers in 1900-1901 found the so-called Antikythera Mechanism, a remarkable 2nd-Century B.C. device that tracked the cycles of the solar system.
“These are unexplored sea depths beneath a trade route known since antiquity,” said Angeliki Simosi, head of Greece’s ephorate of underwater antiquities. “This is virgin territory,” she told Agence-France-Presse (AFP.)
Believed to operate by crank and containing inter-meshing gears, the mechanism could be used to calculate eclipses and moon cycles. The technology was comparable to astronomical clocks that only appeared some 1,600 years later. It was found in the wreck of a cargo ship apparently carrying booty to Rome.
The Greek team is assisted by Brendan Foley, a marine archaeologist from the Woods Hole Oceanographic Institution at Massachusetts, who has helped in past outings to identify ancient shipwrecks over the last five years. Foley is contributing autonomous underwater vehicles to map the seabed and re-breather equipment that partially recycles a diver’s oxygen and will enable the researchers to probe previously inaccessible depths, the senior archaeologist said.
Simosi said she had visited Antikythera in 1985 during construction work to widen the local port of Potamos and the bay was “full of antiquities,” she said. “I believe we could find something equivalent to the Antikythera Mechanism,” Simosi added. “If we do, the entire department will likely need to be sent out,” she said. The operation, jointly funded by the Greek state and Woods Hole, will last until Oct. 22