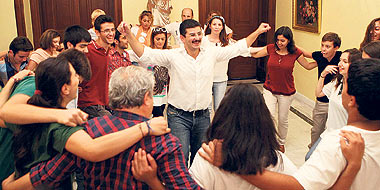 The halls of the Sismanoglio Megaro of the Consulate General of Greece on Sept. 29, teemed with foreigners and locals ringing in the annual European Day of Languages.
The day was proclaimed on Dec. 6, 2001, by the Council of Europe (CoE) and with EU support to promote multilingualism and intercultural understanding throughout Europe. This year marked the Greek Consulate General’s third year of hosting the European Day of Languages celebrations.

Visitors to the Greek Consulate learned, along with a number of traditional and modern dances, to flip their wrists to the rumba flamenca and box-turn to the Austrian waltz. Some of the more spirited participants raced around İstanbul’s Taksim district for a scavenger hunt of the language institutions in the area. The winner received a free language course. Others who wanted a more relaxed introduction to different European cultures enjoyed short film screenings.

Perhaps the most important — and popular — aspect of the European Day of Languages activities was the 20-minute language courses in English, French, German, Greek, Italian, Romanian and Swedish.

“Learning a new language is a door to understanding a different culture,” Greek Consul Victor Maligoudis said. “We’ve organized it so that anyone who attends a course with absolutely no knowledge of the language will be able to leave with a very basic understanding.”

Nearly every language class was packed and not only with young students.  Maligoudis went on to say, “Of course it is important to expose children to foreign languages, but we also want to show adults it is never too late to start learning a new language. People here [in Istanbul] really do want to learn new languages. These crowds prove it. And we see greater interest each year.”

Turkish actress Pelin Batu was there. “I just learned some basic German,” she said, walking out of one of the classrooms. “I am passionate about language, so I am very happy to be involved in this important day.” As a child of a diplomat and whose grandparents immigrated to Turkey from Macedonia, Batu told Today’s Zaman she grew up in a multilingual household.
“Learning a new language leads to a number of opportunities, and it is the only way to truly understand that culture,” she said, while thumbing through a collection of Ottoman contracts and treaties in the consulate’s public library. “Just look at the number of languages dying seemingly with every passing day. It is important to preserve that heritage.”
(source, foto: todays zaman)