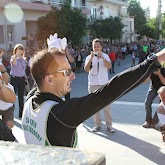 Germany’s Stefan Stu Thoms won the gruelling 245.3 km ultra-marathon Spartathlon race Saturday in 26 hours 28 minutes.
The 46-year-old beat out Japan’s two-year younger Tetsuo Kiso who finished second in 26:36.
Thoms was ninth last year in 27:40 while Kiso was seventh in 27:12.
Finishing third overall and the first female across the finish line was Briton Elizabeth Hawker in 27:02.
Hawker, 36, set a female course record and is the highest ever female finisher in the race which marked its 30th year.
It was the first time that Hawker had participated in the Spartathlon.
The Spartathlon, which traces the classical route of Athenian messenger Pheidippides 2,500 years ago, started at the Acropolis in Athens on Friday and ended in the southern Greek town of Sparta.
In all 310 runners from 36 countries started with many dropping out due to the hot weather conditions throughout the course.
The Spartathlon is described as the world’s toughest race, and is run over rough tracks and muddy paths, crossing vineyards and olive groves, climbing steep hillsides and, most challenging of all, takes the runners on the 1,200m ascent and descent of Mount Parthenio in the dead of night.
(source: AFP)