Greek Island of Dreams Up for Sale 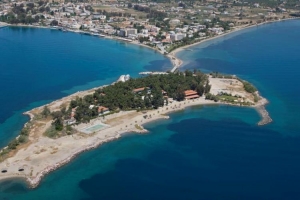 The island of Pezonisi, also known as Nisi ton Oneiron (Island of Dreams), is set to become the first island to be leased to the private sector for tourist development following a decision by the Eretria municipality, the newspaperKathimerini reported.
The 16.3-acre island is located off the coast of Eretria, on the southwestern coast of Evia. The island already has a hotel infra-structure consisting of 52 rooms and 46 bungalows as well as other facilities, but has not been in operation for years.
A tender for the 25-year lease of the island is expected to be announced soon by the local council. According to reports, the annual lease will be set at over and above 100,000 euros.
According to sources, a Greek-American has already expressed interest in leasing the island for 20 years and investing some 3 million euros to refurbish the existing structure.