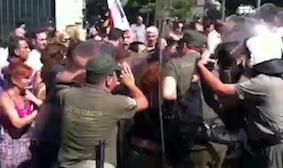 Disabled Greeks and police unionists continued anti-austerity protests in Athens on Sept. 27, as leaders of the three-party coalition government reached a preliminary deal on $14.6 billion of painful budget cuts for 2013-2014 to counter the debt crisis.
Chanting slogans against the new round of cuts on salaries, pensions, welfare benefits and tax increases, Greeks with vision and mobility problems marched in the center of the Greek capital, calling on the government to protect the most vulnerable groups of society.
Over 700 people, including dozens on wheelchairs, attended the protest, which began in Omonoia Square and made its way to Syntagma Square, where they intended to get into the Parliament. But MAT riot police blocked the entrance with two large buses. A standoff ensued, during which most of the riot police and demonstrators retreated into the shade to escape from the sun.
Seizing the opportunity, some demonstrators, including a few on wheelchairs, pushed forward and broke through the security cordon. Unsure of how to react, the police eventually allowed some demonstrators to enter.