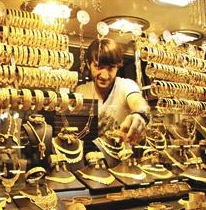 Greeks facing hard times in a crushing economic crisis are heading to Turkey to sell their jewelry, desperate for cash as more austerity measures are set to be imposed on workers, pensioners and the poor.

A silversmith, who declined to be named, told Anadolu Agency correspondent that a great number of Greek citizens were coming to Turkey looking for immediate cash and selling jewelry and other personal items.

Claiming that jewelries were getting collected by pawn brokers in Turkey, the silversmith said that it was impossible for small-scale enterprises to compete with those big companies. Tanju Kircali, another silversmith in city center of Komotini, said that there was a recession in terms of buying and selling scrap metals in the market. He said that most people no longer had many valuable items left to sell, having already sold or pawned them.

According to the story, here was an increase in the number of Greeks who didn’t declare their money while coming back from Turkey leading Greek officials to try to tighten border and customs controls. A Greek silversmith had been seen at Ipsala Border Gate  with 94,700 Euros earned from selling jewelry in Turkey, it was added.