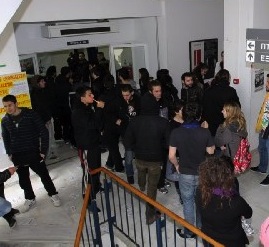 It’s been ten months since Spiros Heliotis migrated to Australia. He studied business administration in Greece but, as have many Greeks, left to find a better life and future. Since then, in collaboration with Nikitas Ballas, he has written a TV series based on the migration wave from Greece to Australia.

The story takes place in several countries. Takes in Greece have already finished and takes in Australia will start later. The series’ main aim, he said, is to create a better image of Greeks and make Europeans dismiss the idea Greeks are lazy layabouts.

The production has a Greek director named Marina Leontari. Ioanna Pilichou and Sanni Chatziargiri star in the series.