GRNews
GreekReporter.comGreek NewsEconomyGreece Set to Shut Down With Protests, Strikes

Greece Set to Shut Down With Protests, Strikes 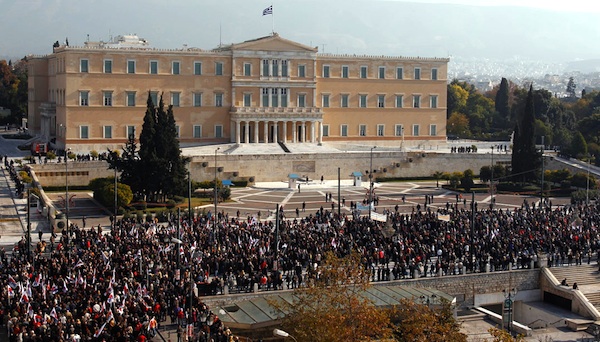 Greek Prime Minister Antonis Samaras’ uneasy coalition government, poised to make another $14.6 billion in pay cuts, tax hikes and slashed pensions on workers, the elderly and poor, faces its first test this week with a series of work shutdowns, including a massive general strike called for Sept. 26.
Protests, strikes and riots brought down the former government of former prime minister and then-PASOK Socialist leader George Papandreou, but Samaras, the New Democracy Conservative leader, has enjoyed a summer delay with Greeks on holiday, as his administration worked on the new austerity measures demanded by international lenders.
There have already been strikes and other protests by doctors,  pharmacists, police, uniformed military officers, teachers, and university academics, but the general strike, called by the country’s two largest labor unions representing public and private workers is expected to draw scores of thousands of people in a volatile brew of workers, pensioners, anarchists, right-and-left wing extremist groups and students.
Public sector workers including tax and customs officers, social security fund workers, employees at municipalities, prefectures and public utilities, state-owned bank workers, merchants, lawyers and a number of private sector workers will be participating in the 24-hour strike called by GSEE and ADEDY.
Gas station owners also said that they will remain shut until 3 p.m., while a strike by air traffic controllers will mean interruptions to flights, especially during the midday hours. Downtown Athens and Thessaloniki are expected to experience serious traffic problems as strikers hold marches, although the Athens Metro will stay open so protesters can reach downtown venues, especially the main Syntagma Square across from Parliament.
Education and health services will also be affected as elementary, middle and high-school teachers walk off the job, along with university professors, as well as doctors and workers at hospitals, medical centers and the ambulance service. Trolley buses and blue buses will be running limited services from 9 a.m. to 9 p.m.
Greek university and technical college professors scheduled a rally the late afternoon of Sept. 25, their unions said, in protest at plans to further reduce public sector spending. The three unions representing educators at tertiary institutions said they would form a symbolic barricade of the ministries of Finance and Development in Syntagma before marching to the main building of the University of Athens for artistic events in support of their demands.
The unions have drafted letters addressed to Finance Minister Yannis Stournaras and Development Minister Costis Hadjidakis, demanding a meeting to discuss their complaints, including that cutbacks to professors’ salaries and university and technical college budgets “are making the smooth operation of institutions of higher education and research problematic if not impossible.”
Their letter also says that, “We believe that you agree that overcoming one of the biggest crises in the country’s recent history requires – among others – the mobilization of all the economic, productive, scientific, social and intellectual forces of this country.”