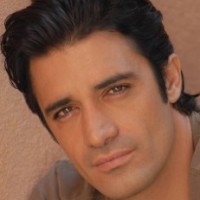 Gilles Marini has returned to “Dancing with the Stars,” participating in the all-star U.S. television version, which premiered last night. The French-born actor, whose parents are Greek and Italian (his family name is Galises), faired well his first time around by finishing in second place with partner Cheryl Burke. His partner for this season is professional ballroom dancer Peta Murgatroyd, the winner of last season’s competition with football star Donald Driver.

Marini has already been seen sporting a wrap around his ankle, and has said in interviews that he’s injured his achilles tendon. He doesn’t plan on letting that setback stop him from dancing to the front of the line in this year’s race for the trophy, however. After the show’s premiere, he looked in tip-top shape, scoring 24 points to put him in second place for the night.

In addition to competing on “Dancing with the Stars,” Marini has also just signed on to become a regular on the television series “Switched at Birth.” Playing the father to one of the lead characters, fans will now get to see even more of the handsome actor on the show about two teens switched at birth, which airs on ABC Family.