Greece Gears Up for Week of Strikes Against Cuts 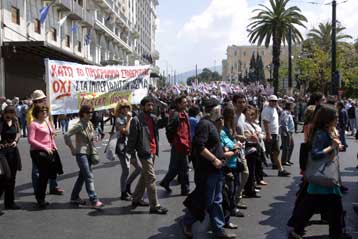 Greek Prime Minister Antonis Samaras faces the first real test of his already-shaky three-month coalition government this week with the walkout of public workers in several sectors and a 24-hour general strike on Sept. 26 against another round of austerity measures.
Samaras’ government, made up of his New Democracy Conservatives, the PASOK Socialists and Democratic Left, is finalizing $14.6 billion in cuts ordered by international lenders, which are aimed primarily at workers, the poor and pensioners again.
The Troika of the European Union-International Monetary Fund-European Central Bank (EU-IMF-ECB) has ordered the cuts and more reforms in return for releasing a $38.8 billion loan installment, the last in a first series of $152 billion in rescue loans, and a pending second bailout, for $172 billion.
But the money comes with harsh conditions to continue with more pay cuts, tax hikes, slashed pensions and the firing of scores of thousands of public workers and a series of strikes are already underway, including a month-long walkout by judges who are working only part-time, intermittent work slowdowns by doctors, the refusal of pharmacists to accept state insurance until they are paid back subsidies and with pressure growing for more of the same kind of demonstrations that brought down the previous PASOK government of Premier George Papandreou
Journalists led off with a 24-hour strike on Sept. 24 and the Sept. 26 strike will include the three major unions: the General Confederation of Greek Workers (GSEE) representing private sector workers, the Civil Servants’ Confederation (ADEDY), and the Communist Party-affiliated All-Workers Militant Front (PAME.) The National Federation of Maritime Workers has also adhered to the strike, which ”is a cry of outrage and despair at everything that is going on,” said GSEE leader Yannis Panagopoulos.
Public sector and state-participating company employees, tax collectors, health and education workers, banks and local autonomous administrations are all participating, as will the nation’s judges. Greek ships and ferries will remain docked, while railway unions have yet to decide what form their work stoppage will take. Athens subway workers will keep the trains running, however, so that people can get to the demonstrations. The two major protest scenes set for 11 a.m. are in Pedio tu Areos Square (GSEE and ADEDY), and in Omonia Square (PAME).
On the health care front, hardships are ongoing for people who are covered by state-owned health insurer National Organization for Healthcare Provision (EOPYY). Tired of waiting for reimbursements that never come, the pharmacists’ union has refused to dispense any more medicine until the state pays up.
(Source: ANSA)