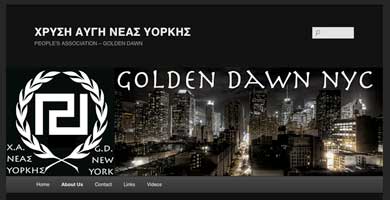 The Greek neo-Nazi Golden Dawn Party has set up an office in New York City in a bid to bolster its support among expatriate Greek communities and promising to dispense it only to Greeks and not immigrants it blames for a rise in crime and who it wants pushed out of the country.

The ultra-nationalist party has been collecting food and medicine at drives in New York for Greeks left destitute by the country’s massive financial crisis and recently distributed the aid in Athens, the Kathimerini daily reported, getting response from Greek-Americans who favor their anti-immigrant, anti-government agenda.

The website of the Golden Dawn New York branch, which features the party’s black swastika-like symbol across a dark New York skyline, promises the aid will be donated “only to Greek people.” Similar drives also have been held in Melbourne, Australia and Montreal, Canada.

The move comes as the party, which got only 0.29 percent of the vote in the 2009 elections but skyrocketed to 6.97 percent in this year’s elections to win 18 seats in Parliament, is soaring again on the back of its pledge to rid Greece of all immigrants.

The party has hit 10-12 percent in recent polls, behind only the ruling New Democracy Conservatives and the major opposition Coalition of the Radical Left (SYRIZA,) and ahead of the once-dominant PASOK Socialists who have fallen to about 8 percent because of its support for austerity measures that Golden Dawn opposes.