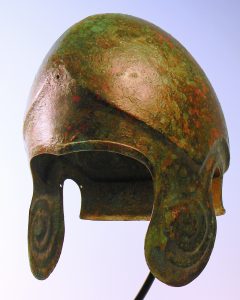 Hixenbaugh Ancient Art in New York has on display a rare ancient Greek Bronze Chalcidian helmet. This perfectly preserved helmet is one of only four known early Chalcidian helmets with distinctive scrolled cheek pieces and is among the earliest of the Chalcidian type, dating to the later 6th-Century B.C.

The Chalcidian-type helmet is identified by its open form design which eventually replaced the more closed form of the Corinthian type helmet. Chalcidian helmets were the most elaborately decorated of all ancient Greek helmets.

Hixenbaugh Ancient Art’s Chalcidian helmet is part of a small group of finely made examples with elaborate scrolled cheek pieces, others are on display at the British Museum, London, and the Metropolitan Museum of Art, New York.

The Chalcidian helmet began to replace the more restrictive Corinthian type helmet on the Greek battlefield in the 5th Century B.C. The preference for the more open and versatile Chalcidian form corresponded with the changing demands of the ancient battlefield.

The pitched battle between evenly matched and similarly equipped Greek phalanxes had then become less common. Chalcidian helmets that allowed for greater sensory perception of the entire battlefield became more popular.  By the time of the Peloponnesian War (434-402 B.C.), the Chalcidian helmet was the most widely used helmet in the Greek ranks and had a wider regional distribution than any other type of Greek helmet. In Southern Italy, the Chalcidian helmet became ubiquitous by the 4th Century B.C. with examples being produced in a number of different workshops running the gamut from crude rudimentary designs to master works of the armor smiths’ craft.

Gallery Director Randall Hixenbaugh has conducted considerable research in area of Greek arms and armor amassing a database of more than 2,000 helmets known to exist. He said, “This Chalcidian helmet is the work of a very skilled ancient armor smith. Helmets of this quality and state of preservation are extremely rare.” The helmet as well as many other new items can be seen at his New York gallery, Tuesdays through Saturday from 11 a.m. to 6 p.m. and can be viewed at its website: (http://www.hixenbaugh.net).