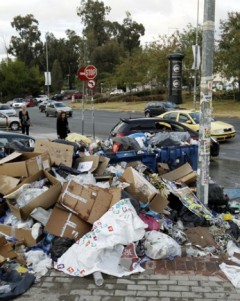 With landfills reaching capacity, Greek mayors facing problems over how to dispose of waste during an economic crisis are being offered help by Germany.

Tripoli Mayor Yiannis Smirniotis told Deutsche Welle of waste that: “We could be earning money from it, but instead we spend money to get rid of it.” Germany said it can help Greece modernize its waste disposal system after learning from its own mistakes.

Hans-Joachim Fuchtel, a junior minister in the German Ministry of Labor, said that, “Thirty years ago, ways were sought in Germany to organize waste disposal effectively. We spent a lot of money until we found out how to do it.” Greek municipalities  are being offered free advice by Germans although the cities and towns will have to pay for travel and accommodation expenses of the advisors.

Kaval Mayor Kostas Simitzis said that he believes that a waste disposal system similar to Germany’s, that is separating garbage into separate bins to pay lower fees, would bring profit to Greece, although it may be difficult to implement. He added: “This is especially where we need advice from Germany. How did their municipalities manage to gain such wide acceptance for such projects among their citizens?”

The entry of Cyprus for the 2021 Eurovision song contest has sparked wide controversy among ultra-conservative Christian groups on the Mediterranean island.
Diaspora