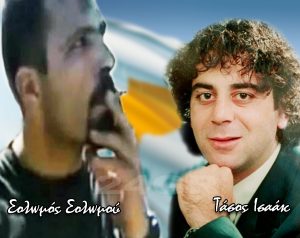 The Turkish newspaper Radical has reported that a university professor was arrested by authorities in Kyrgyzstan and charged in the murder of two young Cypriots, Tassos Isaac and Solomos Solomou, at an August, 1996 rally in Cyprus against the unlawful Turkish occupation of the northern third of the island.
The story, posted prominently on the paper’s website, caused concern at the Turkish Ministry of Foreign Affairs. The accused, Erthan Arikli was at that time President of the nationalistic unlawful group called Turk-Bir. According to Radical, he was living in Kyrgyzstan for the last 14 years and posing as a legitimate representative of the Turkish state in Cyprus.
Isaac was beaten to death on Aug. 11, 1996 by the notorious Turkish nationalist group the Grey Wolves in a United Nations buffer zone near Deryneia at a rally organized by the Cypriot Union of Motorcyclists with the participation of people from all over Europe, which had, as its final destination, the occupied city of Kyrenia in Northern Cyprus. Photos showed him being clubbed by Turkish security forces and other Turks who beat him while he was down while UN forces watched and did nothing to help him.
During his funeral three days later a group of people tried to leave flowers near where he was killed and they too were attacked by the Grey Wolves, some 2,500 of who had gathered during this period to confront Greek Cypriots and Europeans. When Solomou, Isaac’s cousin, tried to  pull down the Turkish flag and replace it with the Greek flag, he was shot in the neck and killed while he was on the flagpole, an event captured on live television.

When Women’s Rights Ignored Around the World, Nations Fail