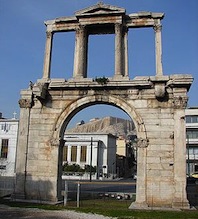 Greek antiquities that have survived after so many years through earthquakes, physical destruction and tourists, are now in danger because the country’s crushing economic crisis has left little money for maintenance, the newspaper USA Today reported.

The article said that many monuments are now in poor condition because of budgets cuts of up to 50 percent for the ministry overseeing culture. “The Temple of Olympic Zeus and the Adrian’s Gate are collapsing,” Despina Koutsouma, President of the Greek Archaeologists Association told the paper.

With more budget cuts coming there is little chance that the monuments will be able to be maintained and will continue to decay. And many are also subject to being vandalized or plundered because of cutbacks in guards as well.