Nikolopoulos Teams With Amram on Kerouac 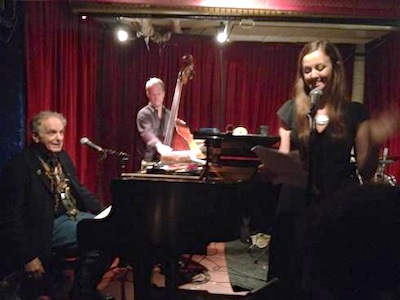 Nikolopoulos was invited by Amram to read from her soon-to-be-released book, Burning Furiously Beautiful: The True Story of Jack Kerouac’s On the Road, which she is co-writing with biographer Paul Maher Jr. The reading took place just a few blocks from where Amram and Kerouac performed the first jazz-poetry readings in 1957.

“I am so excited to be here, reading with David Amram!” Nikolopoulos said as she took the microphone, after weaving through the crowd to get to the stage. She said she considers Amram one of her mentors, a creative genius with a beatific soul who always inspires and encourages other artists.

A classical composer who integrates jazz and ethnic music, Amram has composed for Broadway, film, opera, and the orchestra. He worked with Dimitri Mitropoulos, the Greek-American who became conductor of the New York Philharmonic in 1949, and later dedicated his biography Vibrations to Mitropoulos. Amram also wrote the musical score for the 1961 film Splendor in the Grass, directed by Greek-American Elia Kazan.

Nikolopoulos’ first encounter with Amram was more than a decade ago, when she interviewed him about collaborating with Kerouac. She recently graduated with an MFA in creative nonfiction from The New School, where Kerouac once took classes and where Nikolopoulos had the opportunity to meet and speak with Joyce Johnson and Hettie Jones, authors also associated with the Beat Generation. This was her first time reading with Amram.

As Amram improvised a soft, mood-setting melody on the piano, Nikolopoulos read a section from her book in which Kerouac took a road trip to Mexico. Through imagery, she painted a scene of a sensitive Kerouac, who became so distraught after watching a bullfight that he walked out into the desert to do penance for the bull.

“When I spoke to my co-author, Paul, he suggested I read from the Mexico portion because it is less familiar than the time Kerouac spent in San Francisco, and I chose the desert revelation section because it shows a tender, spiritual side to Kerouac,” said Nikolopoulos. “As its subtitle suggests, part of why we wrote Burning Furiously Beautiful is to bring light to the true story of Kerouac instead of recapitulating beatnik stereotypes.”

“So many critics have dismissed Kerouac’s writing as rambling, however it’s important to note that Kerouac was a voracious reader of the Classics. He was the son of French-Canadian immigrants and didn’t learn how to speak English until he went off to school. He sought to capture a truly authentic American voice, sometimes going to the lengths of recording conversations and referring to letters from his friends to get the syntax and colloquialisms just right. His writing is a beautiful blend of poetry and vernacular – just like Homer blended various Ancient Greek dialects in his epic road trip The Odyssey,” said Nikolopoulos, who is the daughter of a Greek immigrant father and relates to the duality of identity that Kerouac often expresses in his writing.

Kerouac was married to his third wife, Stella Sampas, a Greek-American from his home town of Lowell, Mass. at the time of his death in 1969, and is buried at a cemetery in that city.

“Efharisto!” Amram thanked Nikolopoulos in Greek after she finished the reading. Burning Furiously Beautiful: The True Story of Jack Kerouac’s On the Road will be published this fall.