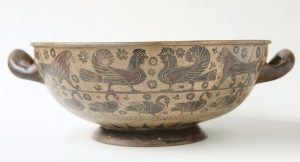 Athenian Potters and Painters: Greek Vases from Virginia Collections is being exhibited at The Muscarelle Museum of Art through Sept. 30, 2012, featuring vases on loan from private collections in Virginia and others from the Virginia Museum of Fine Arts and the Chrysler Museum of Art.

The collection showcases the development of Athenian pottery, beginning with the patterned decoration of a Geometric Amphora (ca. 720-700 B.C.) and ending with the later red-figure decoration on an Attic Red-Figure Column Krater by the Orestes Painter (ca. 440 B.C.).

One of the highlights, a calyx krater (ca. 410 B.C.) by the Nikias Painter, features the myth surrounding the birth of an early Athenian ruler named Erichthonios. The flowing drapery of the figures contrasts with the stiffer, nearly fold-less drapery of the earlier black-figure vases, illustrating the gradual evolution of Athenian painting.

Professor John Oakley, the organizer of the conference and exhibit, noted  that,“This is the first exhibit of classical antiquities ever at the Muscarelle.” His students in a seminar on Greek vasepainting last spring wrote many of the labels for the show and were involved in other ways in planning and presenting the exhibit.

Admission is $10.00, but free for Museum members, William & Mary faculty, staff, and students, and children under 12. For more information about this exhibit or the Museum in general, you can call 757-221-2700 or visit www.wm.edu/muscarelle.

Marketing genius can take many forms -- from the "Music Man" salesmen of the early 1900s, selling band instruments to poor townspeople -- to...
Read more
Art