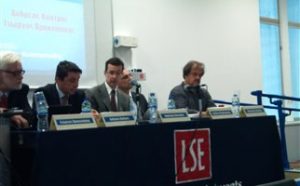 The London-based Hellenic Observatory organized an event on the Greek crisis and its possible resolutions on Sept. 11 at the London School of Economics. Moderated by academic Dimitri Vayanos, along with writer Apostolos Doxiadis, academic Pavlos Eleftheriadis, financial analyst Andreas Koutras and business consultant George Prokopakis, the group made short presentations concerning the long-term “vision” for Greek economy and society.

Doxiadis said that Greeks often get bogged down in opposition for opposition’s sake, rejecting ideas that don’t come from their party. He said one answer to the country’s problems is that politicians should agree on even small issues and accept ideas from other parties. Koutras added that “a patriot is not a person who sticks in the past, but that person who makes the future,” and said that many Greeks follow their politicians’ bad example, hindering the country’s development.

The audience and speakers focused also on how Greeks of  the Diaspora can help and all agreed that initiatives in the direction of improving the quality of public debate in Greece should be strengthened.

The Greek War of Independence had many heroes. The first names that come to mind are: Kolokotronis, Karaiskakis, Papaflessas, Bouboulina, Diakos, Kanaris
Education

Police have made over 30 arrests in Thessaloniki after they clashed with protesters who were demonstrating against a new education bill.
Greek Food