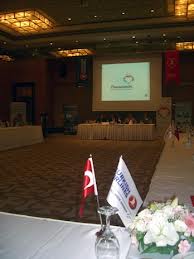 Turkish Airlines launched a new initiative to promote the city of Thessaloniki, Greece’s second-largest city, to Turkish tourists by sending a 13-member mission to Ankara headed by Utku Yazan, Chairman of Turkish Airlines, along with members of Greek tourist associations.

The mission from Thessaloniki visited the Greek Embassy to Ankara. The representatives of the Greek Embassy expressed their satisfaction with the new airlines connecting Ankara with Thessaloniki and also noted the big rise in numbers of Turkish tourists visiting Greece after simplifying the visa requirements.

The Greek mission also met with the Mayor of Ankara, Melih Gokcek and the Mayor of the nearby city Beypazari, Mehmet Cenzig Özalp.

The workshop organized by Turkish Airlines aimed at bringing together top tourist agencies of Ankara and Thessaloniki in order to further promote the Greek city and the beauties of Northern Greece.