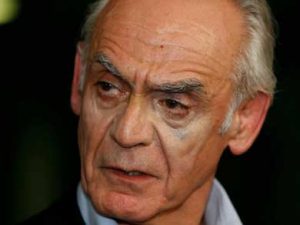 As former  Greek defense minister Akis Tsochatzopoulos remains in detention during an ongoing probe into charges he stole as much as 1 billion euros, or $1.27 billion, from defense contracts when he was in office, a magistrate investigating the alleged money-laundering racket is ready to seize $12.7 million worth of his properties, the newspaper Kathimerini reported.
Tsochatzopoulos has denied charges he misused his power for personal gain, although a mountain of evidence is building against him, prosecutors said. Magistrate Gavriil Mallis is set to move against the former PASOK Socialist top minister if the investigation shows that the properties – all located abroad – are linked to him, the newspaper said, adding that six more suspects have been linked to the holdings although it’s unclear whether they are relatives or close associates of his, as others have been.
The investigation also showed that he paid hundreds of thousands of euros to fly Greeks in from the Black Sea area and Russia to vote for PASOK – it’s a common practice in Greece to buy votes by offering jobs in return as well – and that he bought 1,150 season tickets for the ailing Thessaloniki PAOK soccer team.
Authorities also said they have proof that the former minister engaged in grand money laundering and bribery schemes around a series of defense contracts for missiles and submarines, jacking up their cost to the taxpayers by hundreds of millions of euros in kickbacks.
They said bank data showed that he made at least $127 million in bribes from the purchase of those contracts while he was minister from 1998-2001, sources told the newspaper, and that he received 13 million euros, or $16.8 million during the previous decade for the sale of several properties through offshore firms to the scandalized Vatopedi Monastery on Mount Athos. They also said there is another network of offshore firms and bank accounts yet to be investigated.