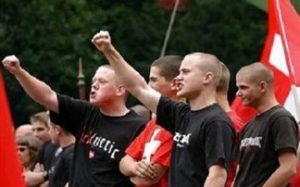 With immigrant-bashing plaguing Greece, two Greek immigrants to Germany – where many have fled looking for jobs – have become victims too, suffering a beating at the hands of Neo-Nazis in the state of North Rhine-Westphalia.

The Greek Proto Thema newspaper reported the incident, citing eyewitnesses. The two men, 35 and 51, were selling newspapers on the streets when they were surrounded by a gang demanding to see their permission papers, then beat them when they could not produce any, the newspaper said.

A few days earlier, nearly 1,000 police officers raided clubhouses and apartments of known neo-Nazis in western Germany after a ban was placed on three violent far-right groups in the country’s most populous state. Ralf Jaeger, interior minister of the state, announced the ban as part of an intensified crackdown on neo-Nazis in the industrial state.

Police searched 146 premises, confiscating weapons, computer hard drives and election posters of the far-right National Democratic Party (NPD) which blames immigrants for crime and unemployment. Its supporters, similar to the neo-Nazi Golden Dawn group in Greece that won 18 seats and has been tied to beatings of immigrants, are said to be concentrated among under-educated and unemployed young men.

Deutsche Welle reported that last December, state authorities in North-Rhine Westphalia set up a new unit in Dusseldorf to police far-right players after shocking disclosures that a secretive neo-Nazi cell based in the eastern state of Thuringia had murdered 10 people — eight  of Turkish origin, one person of Greek origin, and a policewoman — between 2000 and 2007.

Greeks and Turks have been at each other’s throats for centuries, but a rivalry seldom mentioned revolves around the origins of baklava.
Charity

The Penelopean Daycare in Athens has taken care of some of the most disadvantaged children in the Greek capital for decades.
Europe