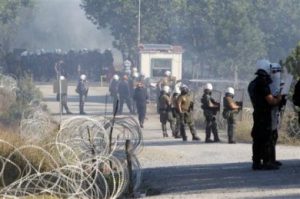 Protesters objecting to plans for a multi-million dollar gold mine in northern Greece’s Halkidiki peninsula clashed with riot police who said they were pelted with firebombs that set a forested area ablaze before being extinguished. Demonstrators said that a Coalition of the Radical Left (SYRIZA) Member of Parliament who had joined them was hit by a tear gas grenade thrown by police.
Local residents have been battling each other as well over whether the gold mine would help the area economically during the country’s deep recession or harm the environment and cut into tourist lodging business.
The clash took place in the Skouries area when dozens of residents from the nearby village of Ierissos, as well as protesters who arrived by coaches and cars from Thessaloniki, approached the forest, where Hellenic Gold, a subsidiary of Canadian firm Eldorado Gold, has begun mining activity that locals are appealing against.
Protesters said the police reacted harshly, with heavy use of tear gas, causing a fire in the woods, and of chopping down trees to prevent demonstrators from approaching the mine. There were reports of several people being arrested and detained at Ierissos police station.
Hellenic Gold has been awarded an area of 26,400 hectares, or 65,235 acres, of which 1,013 is forest land. Almost all the trees in the forest will be cut down as part of the mining firm’s plan to extract gold. The company says it will replant trees when it finishes its work. Opponents of the mine argue it would lead to the destruction of the local forest and irreversible damage to the ecosystem.