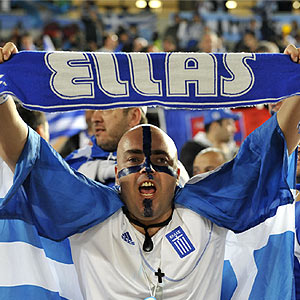 ATHENS – The Greek economic crisis and days of austerity are making even its Super League soccer teams cutting back, preferring to sign homegrown players instead of dealing out big bucks to foreign players who have failed to help their teams advance in European championships.
With many Greeks cutting back even on food and necessities, sports is less in demand and a number of teams are in financial trouble. Teams have almost halved their spending on player contracts this season with even bigger clubs such as AEK Athens and PAOK Thessaloniki making huge cuts, while Champions Olympiakos Pireaus, despite being backed by the financial clout of shipping magnate Vangelis Marinakis, have reduced spending on player contracts by 21.7 percent this term, Reuters reported.
Marinakis was implicated in a scandal to bribe members of the Hellenic Football Federation but denied it and no prosecution has resulted, and many Greeks accept that the game is tainted but don’t care because it’s as much culture and entertainment and sport, and now they will be able to turn their cheers toward Greeks and not foreign players.
Gone are the days when rabid fans would welcome second-tier stars from other countries. Greece never had the financial clout to lure the superstars of the game and the irony was that while club teams, even the top-rated Olympiakos and Panathinaikos, who regularly battled for the title, never did well in European play, Greece’s national team has fared better, reaching the quarter-finals of this year’s European championship and the Under-19 team narrowly lost in the finals to Spain, showing the potential of sticking with domestic players. And this year, for the first time in 22 years, a match featured teams made up entirely of Greek players as financially-embattled Panionios played Aris Thessaloniki.
The Greek Super League is also hindered by investigations into corruption, bribery, match-fixing and game-dumping, although that hasn’t seem to limited its appeal to its hard-core constituencies, generally young men. League President Giannis Moralis. While this year’s champion, Olympiakos, spent some 18 million euros, or $23.04 million, its bitter rival Panathiniakos spent only 8.8 million euros and the club Keykra spent only 600,000, some 30 times less than Olympiakos.
The Greek Super League has little competition between clubs, with some occasional challenges to the Olympiakos-Panathinaikos stranglehold, although Atromitos, a team from the western Athens neighborhood of Peristeri, has reached the finals in the last couple of seasons, but magine the Red Sox-Yankees swapping titles every year to understand the dominance of the highest-spending teams.
But now the financial problems are almost as tight for the teams as they are for the government, which is readying another $14.6 billion in spending cuts demanded by international lenders in return for the continuance of rescue loans. Only the combined intervention of the Super League and the Hellenic Football Federation (EPO) at the last moment helped to avoid the postponement of the start of the season on Aug. 25 and stands are emptying because Greeks have little disposable income.
The answer, said Moralis, was to turn to Greek players. “The crisis has exacerbated the problems for all clubs but I am a firm believer that it has brought us opportunities and the basic and most interesting prospect for Greek football is that we can focus on financial stability and the development of Greek players,” Moralis told Reuters in an interview. “Certainly this is the most difficult year in the history of the Super League, but from our side we will continue to try to find the best solutions for all 16 teams.
YOUTH WILL BE SERVED
The average age of players for this season is the lowest ever, at 23.9 years, giving them a chance to shine and to play. On the first weekend of the season, 66 percent of players were Greek compared with 50 percent last season, while there has been a 27 percent reduction in foreign players overall. Moralis said the showing of national squads in international play proves there is enough domestic talent to be competitive.
Moralis even welcomed the change. “For 10 years the top flight teams have been spending beyond their means and I think the reduction of budgets as a start is an obligatory and correct response,” he said. “These kinds of transfers belong in the past and it is time for clubs to operate with a budget relative to their income. In the past we have seen clubs overspending on big names simply to keep fans happy.
He added: “At this time we have to operate with an entirely different logic and supporters must get used to the fact that not now, and not perhaps for another five to eight years will we get close to the level of top European leagues. The country is going through such a serious crisis, not only in football and sport but in every aspect of daily life. “Fans cannot expect to see those kinds of players in the Greek championship and for me it would also be a big mistake for owners to go down this road.”
Still, it will be a tough year, he said, as new austerity measures for Greeks could lead to more of the same kind of protests, strikes and riots that brought down a previous government and with Greeks worrying about survival, football isn’t on the minds to as many anymore. “From here onwards the fate of the clubs is in their own hands,” he said. “It will be exceptionally difficult for some teams… and it worries us but we’ll do our utmost to make sure that since we started with 16 teams we’ll see 16 teams finish.”