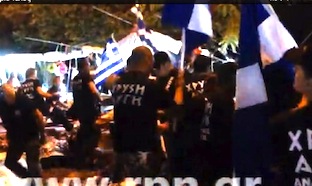 Members of Greece’s extreme-right Golden Dawn party are under investigation for posing as police.
It comes after the emergence of a video which appears to show the group’s supporters in the town of Rafina, near Athens, asking to see migrant vendors’ residence papers.
Shortly afterwards another group is seen kicking over one of the stalls and smashing up merchandise.
One of the party’s MPs, George Germenis, justified the action: “We took a walk around the bazaar and listened to the problems of small goods sellers here and we noticed some illegal immigrants trying to sell their stuff without the appropriate licenses. We told the police and then we did what Golden Dawn must do.”
The Greek public order minister, Nikos Dentias, has made clear he will not tolerate any “usurpation of authority.”
Greece’s two Golden Dawn MPs now face having their parliamentary immunity lifted.
[youtube]mnnX4IhHlj4[/youtube]
(source: euronews)