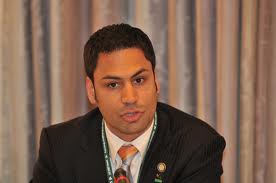 A Quebec politician of Greek origin, Gerry Sklavounos, has been re-elected for the third time – with a 2,000-vote margin, as a Liberal Member of the National Assembly for the electoral district of Laurier-Dorion, where the Greek community has a strong presence. Three more candidates of Greek origin took part in this year’s elections, but were not elected.

The Parti Québécois emerged as the strongest party with 56 seats, followed by the Liberals with 48 seats, the CAQ with 19 seats and, finally, Quebec Solidaire with two seats.

Sklavounos was born in Montreal, to Athina Melissinos and Gerasimos Sklavounos, immigrants from Greece to Canada in the early 1960’s. He spent his early years in the Plateau Mont Royal area of Montreal before moving to the district of Park Extension at age six.

He spent the next 23 years in the area he now represents at the National Assembly of Quebec. Sklavounos received his Diploma of Collegial Studies from Vanier College in 1994, and went on to obtain Bachelor’s degrees in both Civil and Common Law from McGill University in 1998. Sklavounos speaks, reads and writes English, French and Greek.

He was also a torchbearer in the 2004 Olympic relay for the Athens Summer games. In June 2010, Sklavounos was selected as one of North America’s Top 40 Greek Leaders under 40 Years of Age by the Greek America Foundation. One of only two Canadians chosen, Sklavounos received his award at a gala held in Chicago.