The Greek Coffee Cup a Part of New York’s History 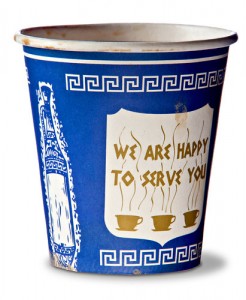 Inspired by A History of the World in 100 Objects, the British Museum’s BBC radio series and book, the New York Times decided to make a list of the History of New York in 50 Objects and the famous Greek Coffee Cup, with its white-fringed Greek key along the top, is on a list that also includes yellow taxicabs and bagels.

Journalist Tony Cenicola reported that, “Before Starbucks and other national chains, takeout coffee was invariably delivered in a blue and white paper cup featuring a Greek vase — as many as 500 million were sold annually as recently as two decades ago. The Anthora, as the cup was called, was created in the early 1960’s especially for the New York market and its ubiquitous Greek diners and delicatessens by Leslie Buck, a Holocaust survivor who was sales manager of the Sherri Cup Company in Connecticut. Demand for the distinctive design — as characteristic of New York as yellow cabs — declined as newer immigrants, including Koreans and Bangladeshis, succeeded Greek restaurateurs who moved to the suburbs.”

According to the Editor and Publisher of the National Herald in Long Island, N.Y., Antonis Diamataris, “The impressive number of cups sold annually show that far too many kids of Greek immigrants studied as well infrastructure projects that have been completed back in Greece thanks to the hospitable United States.”

You can still see the cup as a familiar prop in many television shows and movies set in New York City, invariably depicting a character holding one with coffee steam rising, and ceramic replicas are available in New York museums.