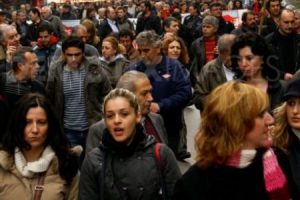 A confidential email to the Greek Ministries of  Finance and Labor from international lenders putting up $325 billion in two bailouts to keep the economy from failing states that Greek private sector workers should work six days a week and longer hours.
The Troika of the European Union-International Monetary Fund-European Central Bank (EU-IMF-ECB,) already pushing the uneasy coalition government led by Prime Minister Antonis Samaras to make another $14.16  billion in cuts, is insisting on even harsher measures for civil servants.
The financial newspaper Imerisia reported that the Troika’s email was sent on Aug. 31, ahead of meetings Samaras had with his coalition partners, the PASOK Socialists of  Evangelos Venizelos and the Democratic Left of Fotis Kouvelis, as the government prepared for the return of Troika envoys on Sept. 5.
The Troika wants greater flexibility in work hours, although Greeks already are near the top in Europe, and wants to let private companies set work rules for hiring and firing and other conditions, according to their needs.
Following the Troika’s orders, the Labor Ministry is expected to put forth measures aimed at the most vulnerable sectors in Greece, including:

The changes seem certain to ramp up tension between the government and labor unions who have already warned they will take their workers to the streets to protest the onset of more austerity measures. In the midst of a deep, five-year recession, with nearly two million people out of work, the closing of 68,000 businesses so far, and the economy shrinking 7 percent, the Troika wants cuts of 5 percent in employer contributions to the national health insurance agency IKA-ETAM. The Troika wants regular briefings on the progress of the reforms.