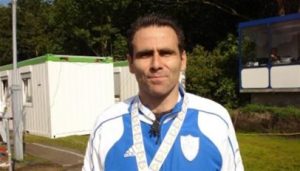 With a throw of 41.63 meters, a new personal record, Marinos Filaktos finished fourth in the discus at the London Paralympic Game, just missing a bronze medal.
The athlete from Halkidona was only 1.18 meters behind the third-place finisher, Lezheng Wank from China, who threw 42.81 meters.
Filaktos’ throws to reach the final got better, and were recorded as 38.31, 39.59, 41.63, 41, 40.50 and 40.14 The gold medalist was Briton Aled Davis with 46.14 with the silver going to Iranian Mexradant Karam Zadeh.
Fikaktos finished fourth as well at the World Championship in Kraitserts at 2011 and 6th at the Beijing Paralympic Games in 2008.