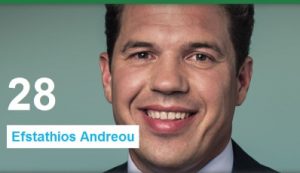 Efstathios Andreou will be the first candidate of Greek origin to run in elections in the Netherlands, with his name on the Sept. 12 Parliamentary ballot with the Dutch Christian Democratic Appeal (CDA) party.

The Dutch party has launched a video on YouTube entitled, “What you do not know about Efstathios Andreou.” Asked why should someone vote for the CDA, Andreou replied that, “The Netherlands is facing major problems, but the Christian Democrats, with their political program focusing on jobs, family and society, have both the answers and the solutions to the problems.”