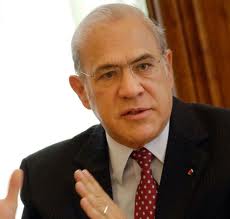 The European Central Bank should do more to stem the crisis in the Eurozone because current financial entities are not sufficient, the Secretary-General of the Organisation for Economic Cooperation and Development (OECD) said on Sept. 2.

“If you have the ECB, which can work in the markets in order to bring down maturities then why not? Angel Gurria told a news conference during an international business and political conference in Slovenia.

“The system is at stake, the euro should not be put at risk … the EFSF and the ESM are not enough, fast enough, reactive enough,” Gurria added, referring to the European Financial Stability Facility and European Stability Mechanism, emergency financing mechanisms being used to prop up weak Eurozone economies.

Gurria said he “hoped and expected” that Germany’s Constitutional Court would approve the ESM on Sept. 12, after it was endorsed by Parliament in June. Failure to approve it would almost certainly doom the ESM. Asked if the ECB should start unlimited bond buying, he said: “Yes, I believe they should, the sooner, the better.”

He said Slovenia, which markets speculate could become the next country to ask for an international bailout, should focus on reforms and only consider any possible bailout after implementing reforms and reducing the deficit.

“If you (Slovenia) have done everything that you need to do, the banking reform, the state-owned enterprise reform, the pension reform, the labour reform … and still the markets are attacking than I would say, yes, let’s ask the family to help,” Gurria said.