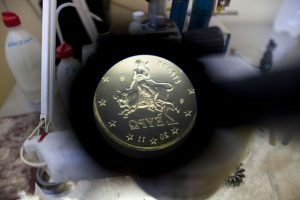 As Greece continues to teeter on the brink of bankruptcy and is regarded as unreliable and untrustworthy for lying about its economy and breaking its promises to reform, the European Central Bank (ECB) is reaching into the country’s mythological past to use a symbol to help make euro bank notes more secure.
Greece is still on the brink of bankruptcy, but the ECB apparently felt secure enough reaching into the country’s storied past to put the image of Europa, the Phoenician princess abducted by Zeus, for its watermark on euros due to come out next year, according to the Bloomberg news agency.
The Frankfurt-based ECB invited public relations companies to pitch for the contract to help present the new notes and dispel concern over the use of the image at a time when investors are questioning whether Greece can remain in the euro area, two sources told the news agency.
Using an image that symbolizes the foundations and history of Europe and transcends national boundaries may reinforce the message of political leaders such as German Chancellor Angela Merkel that the euro is a currency of unity, even though Greece triggered the sovereign debt crisis that’s driven up borrowing costs for governments from Rome to Dublin, pushing at least five economies into recession and threatening to destroy the monetary union.
The ECB plans to make the designs public in November and issue the first new note, a 5-euro bill, in May, two of the people said.  “As we have announced already some time ago, work on the second generation of euro banknotes is ongoing,” ECB spokesman Niels Buenemann said. “Details will be communicated at a later stage.”
Central banks typically redesign their banknotes on a regular basis to improve security and prevent counterfeiting. Putting a face rather than the current architectural structure on the watermark may make it harder for forgers to produce fakes. The ECB has repeatedly delayed the redesign of euro banknotes, which were first introduced in 2002.
In the first half of this year, the ECB removed 251,000 fake banknotes from circulation, down from 310,000 notes withdrawn in the previous six-month period. Current euro notes show windows, gateways and bridges from different eras in European architecture, both as the main pictures on the bills and in the watermarks.
In Greek mythology, Europa, the beautiful daughter of Phoenician king Agenor and his queen Telephassa, was kidnapped by Zeus. Taking the form of a white bull, the king of the Greek gods seduced Europa and stole her away to the island of Crete. Europa, whose moniker could be translated as “wide- gazing” or “far-seeing,” is already depicted on Greek two- euro coins and several commemorative pieces.