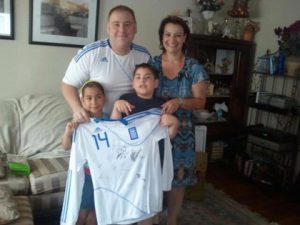 Back in 2006, doctors diagnosed young Gregory Stavrou with autism and told his parents they should have little hope that their son would ever speak. Three years later, Achilleas Stavrou heard his son cheering for his first goal with the autistic children football team Oshawa Challenge League.

The young Gregory soon spoke his first words against all expectations and his strong will and radical progress became a topic of conversation on national TV in Canada. Last summer he even followed a computer games design seminar that helped him create his own video game with racing cars.

According to his father, this is the biggest achievement of his son far, besides taking swimming, bowling and karate lessons. Gregory was only 7 years old when he finished the seminar and surprised everyone when he returned home holding a CD that played the game he made all by himself.

The family, which migrated to Canada some years ago, has launched an effort of raising awareness about autism and its special characteristics. Achilleas has created the Gregory Stavrou Inspires profile in Facebok, which has more than 1,700 friends.